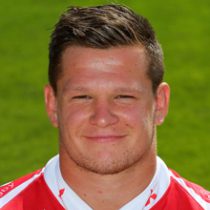 Darren joined the Cornish Pirates as an 'Academy' player in 2006 having played his youth rugby at Truro, joining the city club at the age of 12, and making progress through the juniors and colts set up.

He became a member of the South West of England Rugby Academy (SWERA) based at Truro, and he also gained selection to the England Colleges team in 2005 and 2006.

After making 27 appearances in total for the Cornish Pirates in 2008-9 he joined Gloucester in the summer of 2009.

Dawidiuk made his 100th appearance in Cherry and White when he appeared against Saracens at Kingsholm in January 2015 and signed a new contract to remain at Kingsholm in April 2016.

The Truro-born front row was signed by London Irish ahead of the 2017/18 Premiership season.

Dawidiuk, 29, joins the Exiles from Gloucester Rugby having made 145 appearances for the Kingsholm outfit during which time he lifted the European Rugby Challenge Cup and Anglo-Welsh Cup.