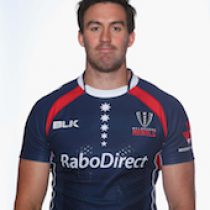 Not many people in Super Rugby would have heard of the name Cadeyrn Neville early 2012, but after debuting in Round Eight against the Bulls at AAMI Park, he quickly established himself as one of the lock forwards of the Australian Conference.

Following his starting debut and the RaboDirect Rebels win over the Crusaders, Cadeyrn took the competition by storm in Perth, with two tries and a victory over the Western Force.

He went on to play all remaining games for the Rebels in 2012, winning both the Rookie of the Year and Matt Cockbain Rebel Rising Medal at the end of year awards event. Success followed his debut season, with a call up to Wallabies extended training squad during the mid-season Test fixtures against Scotland and Wales, which continued into the Rugby Championship and end of season Spring Tour.

Neville has scored 20 points in 63 Super Rugby appearances since his debut against the Bulls in 2012.