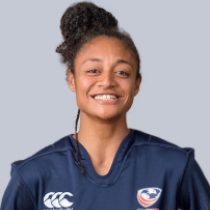 Bulou Mataitoga picked up rugby when she was 10 and living in Fiji. She started with touch rugby and transitioned to regular 15s in 2013 when she moved to the USA. Mataitoga also played basketball and ran track for four years in high school and continued for a year of track & field in college.

Also a rugby player in college, Mataitoga earned Collegiate All-American honors in sevens and earned her first cap with the Women's Eagles Sevens in Dubai 2016.

In April of 2019 she was selected as a reserve for the Women's Eagles 15s historic matchup with the Barbarians (uncapped) in Glendale, CO.