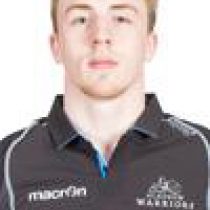 He returned to Scotland having spent the 2018 season on loan at French Federale 2 club, Stade Nicois.

The Number 8 had previously played for Glasgow Hawks in the Premiership and was also a member of the Scotland U20 squad that recorded a best-ever finish at a World Rugby U20 Championship in Georgia last summer.

He was named in the Warriors Champions Cup squad ahead of the 2019/20 season.

As of December 2019, he has represented Glasgow on 6 occasions.