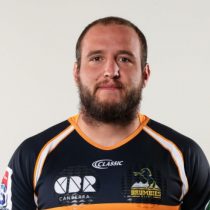 Alexander made his Brumbies debut in 2008 where he came off the bench in round three against the Queensland Reds, scoring a try to the delight of the Brumbies home crowd, in particular the punters. He went on to play six games off the bench in that season.

When the Wallaby squad was named by new coach Robbie Deans Alexander was a surprise inclusion after playing only six games for the Brumbies. He made his test debut against France in Sydney.

After Round 1 of the 2015 Super Rugby season, Alexander became the club’s eighth centurion.

A prolific try scorer, evergreen powerhouse prop Alexander has amassed a total of 105 points and 21 tries, an incredible strike rate for a front rower.

Alexander has 72 Wallabies caps to his name, the versatile front-rower was the Wallabies most capped prop until recently being overtaken by James Slipper.

In June 2017 he re-signed with the Brumbies for the 2018 Super Rugby season, he has amassed 142 caps during his time in the Nation’s Capital and will likely become the franchise’s all-time most capped player when he returns from injury.

The most experienced player in the Brumbies 2018 Super Rugby squad, Alexander showed no signs of slowing down until his retirement in August 2018.