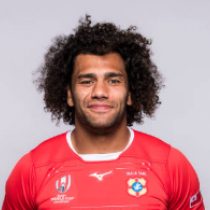 Zane Kapeli returns to the Bay of Plenty Steamers following his Rugby World Cup debut playing for Tonga. Kapeli announced his arrival on the international scene with a bruising tackle on England’s number 8, Billy Vunipola, where he earned the nickname ‘Zane the Train’.

Kapeli, a former rugby league player, has played previously for both Waikato and the Bay of Plenty Steamers and will be hanging up the toolbelt to join the Highlanders in 2020.