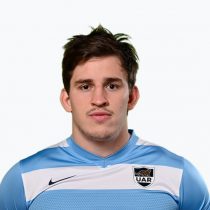 A powerful flanker who brings a no-nonsense approach, with his willingness to take players on in ball carrying situations and defensive prowess characterising his entertaining style of play.

Lezana was a member of the Argentina Under-20 side which competed in the 2013 and 2014 IRB Junior World Championships.

he also represented the Argentina Jaguars team in 2014 in their matches against Uruguay and Canada A, making his senior debut for Los Pumas in November 2014, coming on as an early replacement for the injured Leonardo Senatore in an 18 -13 win over France in Paris.

As of December 2020, Lezana has 39 caps for Argentina and is an established international with a wealth of club competition experience, having played 46 Super Rugby matches for the Jaguares, including the historic win over the All Blacks at Bankwest Stadium on 15 November this year.

In December 2020, Lezana put pen to paper on a two-year deal with the Western Force.

Lezana signed for Scarlets in 2021, making 9 appearances before putting pen to paper in a new deal to remain in Llanelli.