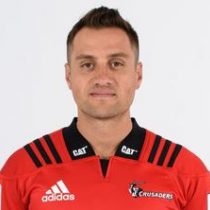 The midfield back, had been playing for the Coca-Cola West Red Sparks in the Top League since 2010 before returning to New Zealand to the Hurricanes.

Bateman, a former Head Boy at Christchurch Boys’ High School, spent two years in the New Zealand U19 side in 2005 and 2006 and one year in the New Zealand Colts when that side lost 13-16 to Canada in Rotorua. He announced his debut for Canterbury in 2006 by scoring a hat trick in an 80-15 Ranfurly defence against South Canterbury and scored six tries overall in six appearances in his rookie season.

A swift attacking midfielder, he made his Super Rugby debut in 2007 - making three appearances in his first season, before playing for them another 32 times between 2008-2010. Bateman made his New Zealand Maori debut at the 2008 Pacific Nations Cup.

Bateman's career has seen him play for the Crusaders, Red Sparks (Japan) and most recently the Hurricanes.

Bateman has made 72 Super Rugby appearances scoring 6 tries & 7 appearances for the Crusaders in 2017 (1 vs The British and Irish Lions) scoring 3 tries.

He was also named in the Maori All Blacks squad for their matches against Canada and the French Barbarians.