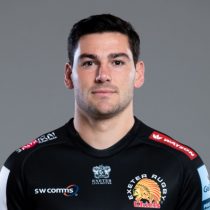 Born in Granada, Spain he previously plyed his trade at Merchiston Castle School as a stand-off before turning his trade to scrum-half, where he earned a place on the 2013 Macphail scholarship to New Zealand.

Hidalgo Clyne has represented Edinburgh at under-16 and under-17 levels and Scotland at under-17. He was a key part of the Scotland U20 side in the 2013 RBS 6 Nations.

In January 2015, he was selected in the Scotland team for the upcoming 6 Nations.

He secured his 50th cap for Edinburgh in March 2016, kicking two penalties and a conversion to bring him within two points of reaching 300 points. He surpassed the milestone with a try, in the win over Zebre at BT Murrayfield in April 2016.

In May 2017, with 9 caps to his name, Hidalgo-Clyne was included in the Scotland squad for their summer tour. However, he withdrew from the summer tour squad after sustaining a hamstring tear.

In March 2019, the scrumhalf joined Harlequins on a short-term loan until the end of the season.

February 2020 saw him sign a two-year deal with Exeter Chiefs.