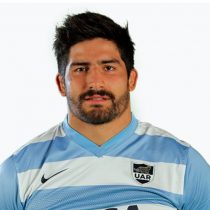 Bruni represented San Luis, an Argentine rugby union and field hockey club from the city of La Plata, where he made 65 appearances scoring 90 points since 2014.

He was called into the Argentina squad in 2017 but only made his Test debut the following year against Ireland at Lansdowne Road in November.

A powerful back-rower, Bruni is a hard hitter on both sides of the ball and made himself a regular with the Jaguares and made 15 appearances for the side as they reached the Super Rugby Final.

He went on to represent Argentina at the Rugby World Cup in Japan.

In 2020, Bruni started Argentina's historic 25-15 win over the All Blacks. He took his test cap tally to 7 during the Tri Nations before signing for PROD2 club Vannes in December 2020.