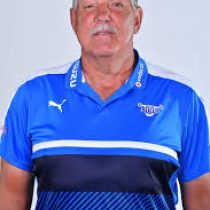 An 8th man in his playing days, Human made 200 first class appearances for Eastern Province and Freestate combined.

Human moved to coaching in 1996 where he started off at the Griffons & Griquas before a number of moves in the South African Club Rugby set up before assisting Heyneke Meyer in the 2007 Super Rugby win for the Bulls. He coached the Bulls Currie Cup side to a drawn final and shared trophy and went on to help the Black Rams win promotion in Japan Top League under Head Coach Todd Louden.

In 2018 he was appointed head coach of the Bulls Currie Cup side. He took over as the Bulls head coach in 2019 after John Mitchell departed for a role with England.

The Bulls released Human in 2020 with Jake White coming in to replace him.

In September 2021, he was appointed Houston Sabercats' new head coach ahead of the 2022 Major League Rugby.