Lions 1, Springboks 0. Such is the situation after last weekend as we dive headfirst into the second Test, which has the makings of a beautiful and beastly affair.


The Lions stuck one on the Boks in Cape Town last weekend after a brilliant second half comeback which saw them transform a 12-3 deficit into a 22-17 victory. It was a 40 minutes which betrayed the fact that Siya Kolisi’s charges are short on match fitness as they lost their way as the game aged, allowing their red-clad opponents back in.


As expected, Warren Gatland was all smiles after the final whistle, although the wily old New Zealander’s joy was tempered by the knowledge that they would face a bruised but vicious Springbok side in the second Test.


“They’ll be hurt from this because they’re an incredibly proud nation and world champions,” he said. “Next week will be even bigger and tougher I would expect.

“The bounce of the ball could have gone any way for both teams. If a couple of calls had been different that might have affected the result. It was a really tough, tight Test match. But thankfully we’ve come from behind and finished really strongly. I thought we got stronger and stronger as the second half went on.”

It is no secret that the Springboks are short of match-practice and it showed last Saturday in a performance which was somewhat stale in comparison to what the team is capable of. De Klerk and Pollard did a fine job in dictating the game with the boot in the first half but, as the Springboks lost their way in the second stanza, the Lions tapped into a new gear and rumbled on to victory.

It was a mystery to many watching that, arguably the top player in the world at present – Cheslin Kolbe – was not utilised more by the Springboks. The elusive winger made only three carries over the 80 minutes. Considering the kind of assaults he is capable of enacting on defences all over the world, it is strange – to say the least – that the ball did not find its way into his hands more often.

Once again, the teams were named early in the week and each starting XV contained three changes.

In the Lions’ side, Chris Harris replaces Elliot Daly at outside centre, scrumhalf Conor Murray comes in for Ali Price and Mako Vunipola will take on the loosehead prop role from the outset.

Daly was not firing last weekend and the outside centre channel was neither an area of effective defence nor attack. Many thought that Bundee Aki could be brought into the inside centre position with Robbie Henshaw possibly shifting outside. However, Gatland has put his trust in Harris who has shown decent form on the tour thus far.

Murray was his old, reliable self when he took the field in the second half and his experience will no doubt put Gatland’s mind at ease in this must-win encounter.

After having his fitness questioned before the tour, England international Mako Vunipola was impressive during his spell on the field – holding his own against the might of Frans Malherbe in the scrum contest. 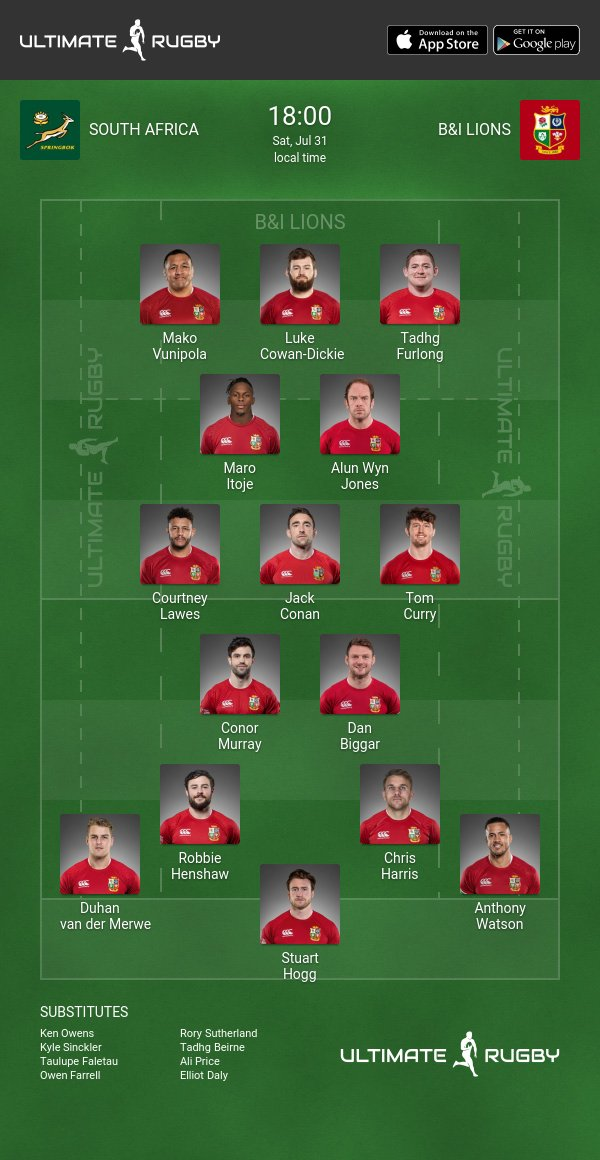 The Springboks’ experiment with the energetic Kwagga Smith at number 8 did not bear the kind of fruit that they had hoped, leading to the summoning of the robust Jasper Wiese to manage things from the back of the scrum. Wiese is in the mould of the typical South African forward – menacing, strong and tough. At just 25 years of age, he has already earned himself a big reputation in England where he currently plies his trade with Leicester Tigers. The Lions can expect their defensive lines to be tested often by Wiese’s bullocking charges.

In the front row, Bongi Mbonambi has been retained, but finds himself flanked by a new set of props in Steven Kitshoff and Frans Malherbe who take over from Ox Nche and Trevor Nyakane respectively. 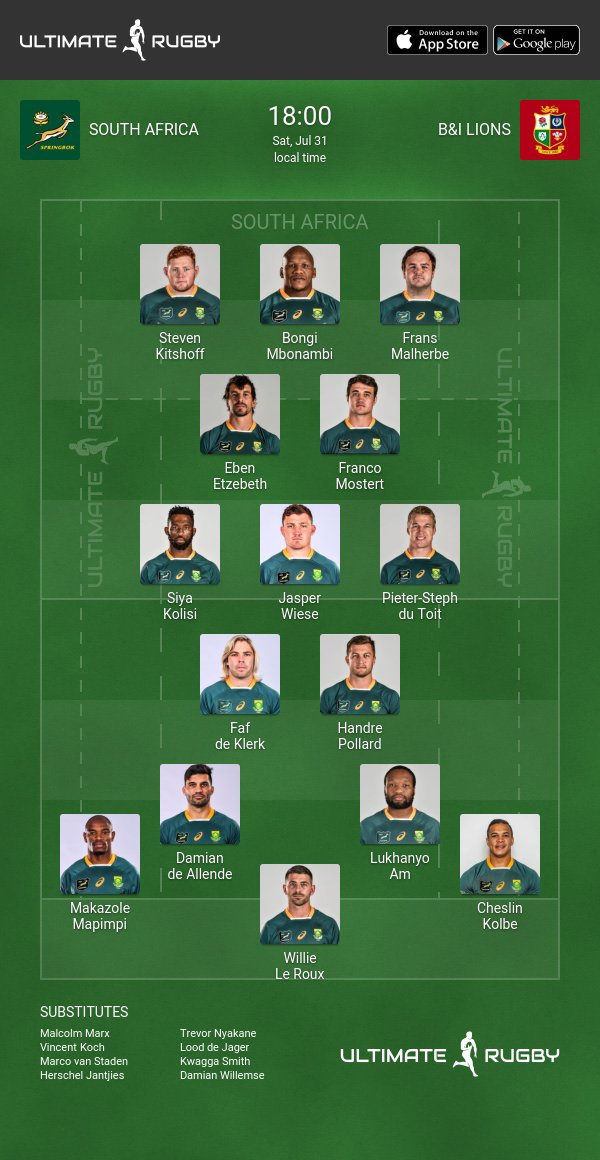 A great part of the beauty of this series is its juicy unpredictability. As people crane their necks to their screens on Saturday, minds will be flooded with an array of questions; can the Lions stem the tide of a vicious Springbok fightback? Will the selections pay off? Will the Boks finally find their rhythm and, if so, will they be good enough to stick one on a talented Lions outfit whose determination is at its peak with the series within its grasp?

From a Springbok perspective, one can only hope that their traditional strengths will blossom when needed most and that the game will be dictated not by the Lions, but by the ferocity of the men in green and gold.

The Lions have the advantage of the winning momentum which they worked hard to attain last week. They have done the business once already... in their minds, there’s no reason they can’t do it again.

What is for sure is that the opening stages of the match will be a brutal war of attrition as both sides fight tooth & nail for physical ascendency. Last week will have shifted the Springboks’ attention onto the latter part of the game and it will be interesting to observe the manner in which Nienaber utilises his bench in a bid to counter-act the doldrum into which the Boks slipped in that game. Conversely, the Lions will be looking for a much stronger start as it was the first half which gave them problems before they hit good rhythm in the second.

The ever increasingly controversial Springbok Director of Rugby, Rassie Erasmus, catalysed an explosion in the media this week with an hour-long video highlighting inconsistencies by referee Nic Berry. The fall-out has been enormous, not just in South Africa and Britain and Ireland, but across the rugby world.

All in all, another mouth-watering occasion on the horizon. Will the 2021 series be decided this weekend, or will the Springboks raise their fists to the night sky in victory?