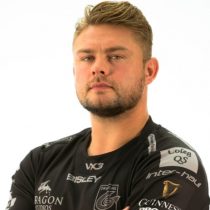 Newport-born Lewis has come up through the age groups at the Dragons and played for Welsh Premiership sides Ebbw Vale and Newport before the Dragons decided he was ready for the step to professional regional rugby. Since then Lewis has only got better and since 2008 has been a crucial part of the Dragons squad.

He’s also impressed at an international level representing Wales at all age group levels and the 7s side. Lewis has twice been called up to Wales International Squads. On the first occasion, for their tour of North America in the summer of 2009 he was ultimately unable to take up his place in the squad as the Dragons were involved in a Heineken Cup 24th place playoff.

His second call up came this season for the post-World Cup Australia game in Cardiff after a number of impressive performances for the Dragons, notably his man of the match showing against French giants Perpignan just before the squad announcement.

In August 2016, Lewis was appointed the captain of Newport Gwent Dragons ahead of their 2016/17 season and later that campaign hit his double century for Dragons.

Record-appearance maker Lewis Evans made his 200th appearance for Dragons in 2017, running out in front of a home crowd against Ulster in the Guinness PRO14.