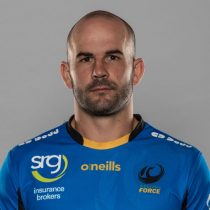 A former Australia ‘A’ Schoolboy, Jono made his mark with both the Australian U20s and Australian Sevens sides during 2010. He scored eight tries and featured in all eight tournaments on the 2010/11 Sevens World Series Circuit.

He had his first taste with the Reds as a member of their Development Tour of the United Kingdom in 2008. Jono was a member of the Australian Under 20s side that recorded Australia’s best result at an IRB Junior World Championship after finishing runners-up to New Zealand in the final in 2010.

He played in the National Rugby Championship for the New South Wales Country Eagles in 2015 before joining the Western Force for the 2016 season.

He starred for Perth Spirit in their 2016 title-winning National Rugby Championship campaign before being called up to the Wallabies touring squad.

On 1 July 2017 Lance signed a one-year extension with the Western Force.

The flyhalf was signed by Worcester Warriors on a short-term deal in October 2017 with immediate effect, arriving at Sixways having recently featured for Western Force in their 2017 Super Rugby campaign.

In November 2017, the experienced Lance signed a deal with the Melbourne Rebels for the 2018 season.

On his return from his short stint with Worcester Warriors, Lance was released from his Melbourne Rebels contract so that he could rejoin his former side the Queensland Reds.

In February 2018, Worcester Warriors announced that Lance would be returning to the Club ahead of the 2018/19 season on a two-year contract.

A two-time Super Rugby winner, with the Reds in 2011 and New South Wales Waratahs in 2014, Lance is an experienced number ten who has becpme a fan favourite at Sixways.

Lance captained Warriors to Premiership victory over Harlequins at The Stoop in November 2019 where he kicked 14 points in a 19-14 win and scored his first Warriors try in the home win over London Irish the following month.

As of May 2020, he had made 30 appearances for the Warriors, and has scored 82 points. After initially signing with Edinburgh ahead of the 2020/21 season, he was unable to join the side due to work visa issues.

In September 2021, he signed a deal with Top League side, Honda Heat.