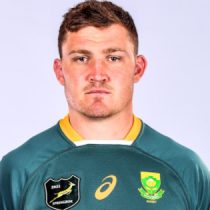 After high school, Wiese moved to Bloemfontein, where he joined the academy of the Free State Cheetahs and the CUT Ixias university team.

He was invited to trials for the South Africa Under-20 squad as they prepared for the 2015 World Rugby Under 20 Championship, but wasn't included in the training squad named a week later.

At the end of 2016, Wiese was included in the Cheetahs Super Rugby team's training group for the 2017 Super Rugby season, but it was also announced that he would link up with the Welkom-based Griffons after his Varsity Cup commitments.

He has been included in the Cheetahs 2017 Currie Cup squad. He made his PRO14 debut against Connacht later that year and played in all of the SuperSport Rugby Challenge in 2018 games.

He heads into the 2019 Currie Cup having already featured in 10 PRO14 games for the Cheetahs. By 2020, the hard-working, physical back-rower had become an integral part of the Cheetahs' PRO14 and Currie Cup team starting regularly for the side.

His form caught the attention of the Leicester Tigers who signed the back-rower ahead of the 2020/21 season. He made 20 appearances scoring six tries

He was named on the bench for his test debut against Georgia and earned his first test cap. He then turned out for the South Africa A team who managed a 17-13 victory over Warren Gatland's charges.