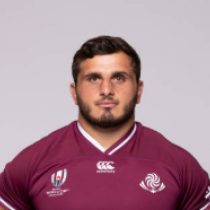 The Georgian prop played in the U20 World Championship in 2017 after being selected while representing Locomotive in the Georgia Championship.

The Tbilisi native was spotted and subsequently signed by Racing 92 where he went on to make his Top 14 and Championship debut's in 2018, his first season with the French club

2019 saw him being named in the Georgia squad for the Rugby World Cup.