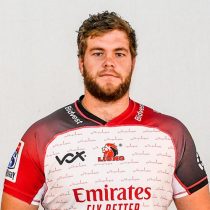 A tough tighthead prop from Monument High School Frans represented the Lions at youth level before he joined the Western Province Institute.

He has been tipped for a big future and is a highly rated scrummager.

Van Wyk made his first class debut for Western Province in 2015 and went on to represent the SA U20s at the 2015 U20 World Cup.

He was named in the Stormers 2017 Super Rugby squad and made his debut against the Bulls in July.

van Wyk made 2 appearances for the Stormers during 2017 Super Rugby season and left the side and joined the Bulls after the Currie Cup season.

He made the switch to the Bulls for the 2018 season and made 10 appearances in Super Rugby while also featuring in the Currie Cup.

He made another move, this time to the Lions, for the 2019 Super Rugby season - where he made 6 appearances that season.