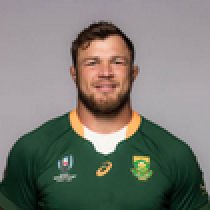 Born in Nelspruit in 1986, Duane Vermeulen has risen to be one of the foremost back-rowers in the international game. Having starred for the Emerging Springboks in their draw with the British and Irish Lions in 2009, Vermeulen battled his way into the Springboks squad in 2012, making his debut in a loss against Australia.

Since then he has established himself as a hard-hitting forward, as well as a tireless worker for the team. Comfortable on both sides of the back row, his preferred position is number 8, where he operates for both club and country. At provincial level, Vermeulen has won the Currie Cup on two occasions, in 2007 with the Cheetahs and in 2012 with Western Province.

In 2014 he was nominated as the IRB Player of the Year and has was appointed Stormers Super Rugby Captain for the 2015 campaign. Vermeulen sustained a serious neck injury towards the end of the 2015 Super Rugby season which required surgery. He recovered in time to help the Springboks reach the semi-finals of the Rugby World Cup where they were beaten by eventual winners New Zealand. His highlight of the tournament was a lovely offload from the back of a scrum that led to a match-winning try for Fourie du Preez which knocked Wales out of the competition.

Following the World Cup Vermeulen joined French side Toulon for the 2015/16 Top 14 season. He was named in the Springbok squad ahead of the June test series against Ireland and started the first two games vs Ireland and did not play for the Springboks again that year. Vermeulen picked up an injury before the Test Series against France and failed to feature for the Springboks in June and the Rugby Championship in 2017. He returned to action for Toulon in the Top 14 in October and in November he was recalled into the Springbok squad after the first November Test against Ireland.

In May 2018, he was named in Rassie Erasmus' first Springboks squad as one of four overseas-based players and went on to start all three test against England taking his test cap tally to 43 before confirming that he will not represent the test side during the 2018 Rugby Championship. Later in June he signed with Top League side Kubota Spears for the 2018/19 season. He returned to South Africa and Super Rugby with the Bulls during the 2019 season as he turned out for the Bulls and took his Super Rugby cap tally in the competition to 112 caps and 8 tries as the Bulls reached the Super Rugby playoffs.

Once again he was called into the Springbok squad for the Rugby Championship and was handed the captaincy for the clash with the All Blacks in what was his 47th test match and in doing so became the 62nd Springbok captain.

Vermeulen maintained a starting role for the Springboks throughout the World Cup and put in a man of the match performance in the Final which the Springboks beat England 32-12.

After the World Cup, he returned to Kabuto Spears before signing a deal to return to the Bulls in 2020.

As of July 2020, Vermuelen has 54 test caps (all of which coming in the starting XV) scoring three tries.