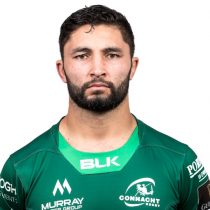 Despite being one of the strongest of the Brumbies forwards during his four brief appearances in 2012, Faingaa spent the majority of the season working hard to get himself out of a moon boot and into something with studs.
The 2011 Australian Under 20’s skipper has been earmarked as a future Wallaby since making his Brumbies debut against the Chiefs in 2010.

A strong ball runner and gap-proof defender, Faingaa has all the qualities elite coaches are looking for when selecting a loose forward.

The younger brother of Reds and Wallabies twins Saia and Anthony Faingaa, Colby has forged his own path at the Brumbies playing every game in 2011.

He looked set for another big year with the Brumbies in 2012 before being chopped down by injury in Cairns during the final away trial match against Queensland last February.

Now in his third full year of professional rugby, Faingaa will be looking to expand his book of tricks to help the Brumbies forwards claim more ball at the breakdown and to get over the advantage line.

One of the Tuggeranong Vikings best players, Faingaa has lent support throughout 2012 and will continue his relationship with the club in 2013.

Faingaa joined the Rebels in 2014 and has continued to impress with the Melbourne side, he picked up the clubs highest award in his first season as he was named the Player's Player.

His versatility has helped him earn over 50 appearance with the Rebels (87 Super Rugby caps overall) and having only signed a one year deal on arrival in Melbourne, he is now contracted until at least the end of 2018.

Faingaa made his 100th Super Rugby appearance against the Reds before signing a deal to join Pro14 side Connacht following the conclusion of the 2018 Super Rugby season.