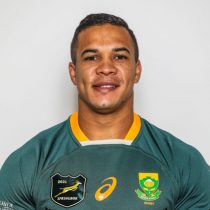 An electrifying player on attack, Kolbe is a nightmare for any defence. In only his first year out of school, he represented the South African Sevens team and went on to have an even bigger year in 2013 when the utility back starred for the SA Under-20s, the SA Sevens team, featured on the bench for the Stormers and played in the Currie Cup final for Western Province.

He was a consistent selection in the WP and Stormers teams.

2016 saw Kolbe get inclusion into the 12-man Blitzbok squad for the 2016 Summer Olympics in Rio de Janeiro, where he was named as a substitute for their first match against Spain, with the South Africa winning the match 24–0.

2017 started on a good note for Kolbe as the fullback was signed by Top 14 side, Toulouse for their 2017/18 campaign. He enjoyed a successful start to his time in France scoring 9 tries in his first 23 games for the side.

Kolbe was called up to the Springbok squad ahead of their Rugby Championship matches Australia and New Zealand.

He made his test debut off the bench against Australia in Brisbane before scoring his first test try in the Springboks historic win over the All Blacks in Wellington a week later.

He became the second South African to score a try in a Rugby World Cup final, following Makazole Mapimpi who scored in the same game as South Africa beat England 32-12 to win the World Cup for a third time.

He was instrumental to the Boks’ World Cup-winning campaign and walked away with the Top 14 Player of the Year award, Best Try of the Season and was also voted the Best Top 14 Player at the World Cup, beating Fijian star Semi Radradra of Bordeaux-Begles and Clermont Auvergne’s Damian Penaud.

He was selected for the Springboks' 46-man squad for the 2021 series against the British & Irish Lions and turned out for the South Africa A team who managed a 17-13 victory over Warren Gatland's charges.

Kolbe secured another top title in 2021 as he helped Toulouse secure their first Champions Cup trophy in a decade. He won the award for the try of the competition for his score against Ulster in round one.