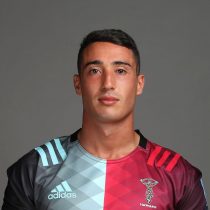 A product of the prestigious rugby school, Wellington College, Herron was earmarked as one of their finest rugby-playing pupils.

He made his Bath United debut in 2014 and he has dazzled the Rec with his playmaking skills.

Herron is Irish-qualified and is a former England U18 international and his progression has been keenly observed by national selectors at all levels.

Brett has 8 Ulster caps to his name and has impressed with every outing in the white shirt.

In March 2018, Ulster announced that Herron willl join Jersey Reds at the end of the campaign.

Herron then joined Jersey Reds last season and, having put in an eye-catching performance against Harlequins in a pre-season fixture between the clubs, has been a stand-out player for the Channels Islands’ side all season scoring over 100 points in 21 matches as they have risen to third in the Greene King Championship.