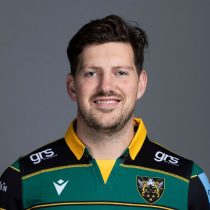 Symons started out his career with Saracens Amateurs and Old Albanians, but after linking up with the Saracens Academy, a bold move to New Zealand beckoned for his first taste of professional rugby.

After spending a season playing for Tasman in the ITM Cup, Symons then returned to the UK to join Worcester Warriors in 2013 – via Leicester Tigers’ sevens side.

Making his debut in the Anglo-Welsh Cup later that year, the centre opened his Premiership account with a debut score against the Tigers.

Standing at 6’5” tall, Symons soon made his impression in the Premiership and made over 50 appearances for the Sixways outfit before switching to Gloucester in 2016.

In March 2018, Symons became the latest player to join Northampton Saints’ ranks from the 2018/19 season onwards, with the Club announcing the centre’s switch from Gloucester Rugby.

He made 3 appearances in his debut season with the Saints.

After notching up a further 14 caps for Saints, Symons left the club to pursue a career in France.