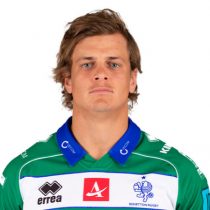 Playing wing, fullback, and center, the utility back moved between a couple of provinces in his junior years. Coetzee represented the Pumas at U18 and U19 level, Western Province U19s and the Bulls U21 team before and settling down with the Lions U21s in 2011.

Coetzee played Varsity Cup for Tuks before he made his Super Rugby debut for the Lions in 2012 and made his Currie Cup debut in the same year. 2013 saw him go on loan to the Sharks after the Lions were replaced by the Kings in Super Rugby. After an injury-plagued 2014 season, Coetzee enjoyed an extended run as the Lions finished in eighth place in 2015, and featured in their unbeaten run to the 2015 Currie Cup title.

He continued to perform for the Lions in the 2016 season as they made their way to the Super Rugby final, where they lost to the Hurricanes. Coetzee became an important part of then-head coach Johan Ackermann's side as he consistently performs for his side.

He continued his good form with the Lions in the 2017 Super Rugby season and in May was included in the Springbok squad to face France. Coetzee played all 13 of the Springboks tests in 2017 having debuted against the French.

In 2019, Coetzee spent time in Japan with Kintetsu Liners but returned for the 2020 Super Rugby season before once again returning to Japan.

In March 2021, the 13-test cap fullback signed for Italian side Benetton. He joins the Italian side with 99 Super Rugby caps scoring 13 tries along with 48 Currie Cup caps and 9 tries.