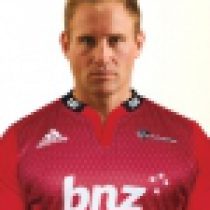 Ellis has been the first choice halfback for the Crusaders since his debut season in 2006. He remains one of the standout players of this competition with his fast, aggressive, efficient and intelligent playing style.

A member of the Rugby World Cup winning All Black side in 2011, Ellis was unlucky to miss selection in 2012.

He made his All Black debut against England at Twickenham in 2006 and was also a member of the 2007 Rugby World Cup side. After being in and out of the NZ squad a solid season for the Crusaders in the 2015 super Rugby Championship saw a recall for the consistent half back.

In May 2016, Ellis announced his retirement from the Super Rugby to commit to Kobelco Steelers in Japan.

In 2020, Ellis confirmed his retirement from the game after a trophy laden career that saw him win titles with the All Blacks, Crusaders and Kobe.

In December 2020, the former All Black who played 28 tests for his country and made over 150 appearances for the Crusaders, was presented with the Nhe NZRPA Kirk Award for his contributions to the game off the field.

Ellis has a broad resume since retiring and works tirelessly to support and develop current players with their pursuits outside of rugby.