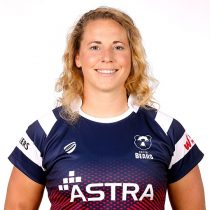 Amber added a 2014 World Cup winners’ medal to the list of rugby achievements her family have picked up over the years. Her uncle, Andy Reed, was a British Lions and Scotland lock. Such are Amber’s sporting talents that she also played youth cricket for Gloucestershire and hockey for Bristol.

She obtained a 2:1 in Exercise and Sports Science from the University of Exeter where, in the 2012/2013 season she not only won the BUCS Championship but was also the BUCS Sportswoman of the Year. She first thought that playing high level rugby was within her reach when being included in the England U20 set up in 2010. Amber works as a PE teacher.

She is also an ambassador for the Bristol Rugby Community Foundation’s Eagle Project in her home city.

On her 25th Test appearance against Scotland in February, Amber contributed the conversion of Harriet Millar-Mills’ first try and a penalty to England’s 32-0 victory before converting three of her side’s first four tries against Italy.

Amber is playing her club rugby with Bristol and has won 39 caps for her country. Reed was selected for the England squad for the 2017 6 Nations, with her impressive form guaranteeing her a place at the 2017 Women's World Cup.