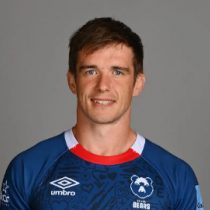 Born in Dublin, the Irish native burst through the ranks for the US Eagles in 2015 making his debut against Samoa in the Pacific Nations Cup.

MacGinty attended Blackrock College and played with Blackrock RFC up until 20s before he moved to the US. He studied Sports Science at Life University in Georgia.

Following his participation in the 2015 Rugby World Cup, he was signed by Connacht for the 2015–16 Pro12 season. Connacht head coach Pat Lam said the province had been following MacGinty since the Pacific Nations Cup earlier in the year.

MacGinty made his domestic debut for Connacht appearing off the bench in their 33–19 win over Benetton Treviso on November 6th, 2015. He then made his European debut on 14 November 2015 in the first match of the 2015–16 Challenge Cup, starting at fly-half and scoring nine points. He led Connacht to a 28–23 bonus point win over Edinburgh in March 2016 and "controlled matters expertly" to manage Connacht's fifth consecutive win and maintain first place in the Pro12.

In May 2015 it was announced that MacGinty would join English Premiership side Sale Sharks when his deal with Connacht finished in the summer, with South African-capped Marnitz Boshoff taking his place at the province. He was signed as a replacement for outgoing England international Danny Cipriani.

Following his performances in the Nations Cup, MacGinty was named in the American squad for the 2015 Rugby World Cup. He featured in three of the team's four games, starting in each of his appearances and scoring 25 points.

In May 2016, the out-half was in preparation to play a prominent role in the Connacht's Pro12 final against Leinster. In March 2018, Sale Sharks re-signed MacGinty on a new four-year contract.


Regarded as one of the best fly halves in the Premiership, MacGinty signed a deal to join Bristol Bears ahead of the 2021/22 season.

He links up with Pat Lam once again, having helped Connacht to a maiden PRO12 title during the 2015/16 season.

Named captain of USA Rugby in June 2021, MacGinty featured for the American squad in the 2015 Rugby World Cup, scoring 25 points in the competition.