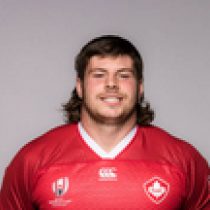 A former Wilfrid Laurier University captain, Quattrin played for the team from 2014-2018 and was a four-time OUA Men’s Rugby All-Star and the first rugby player ever to be named OUA MVP.

During the 2018 season, he led the team to its first OUA medal, a bronze, scoring two tries for the team in their 17-6 win over the Waterloo Warriors.

For the latter season, he also received the Fred Nichols Community Service Leadership award. He also was named Athlete of the week on three occasions.

Andrew progressed through Canada age-grade rugby and played for the Canada Under-20s. He played for the Aurora Barbarians, the Ontario Blues, and for the Arrows during their 2018 exhibition season.

He signed on with Toronto for the 2019 Major League Rugby season.

He was named in Canada's extended squad for the 2019 Nations Cup.