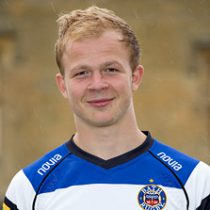 Homer made his debut in an LV= Cup match against an experienced Harlequins side in February 2015, where he kicked 10 points to help his team claim a win at the Stoop.

He entered the Bath Senior Academy set-up in the 2014/15 season, joining from rival Dorset school Sherborne.

September 2016 saw him being promoted from the Academy to the senior Bath squad for the 2016/17 season.

Homer joined Yorkshire Carnegie on a dual-registration agreement in August 2017.

After two seasons with the Reds, the former England Under-20s international signed a deal with the Scarlets.