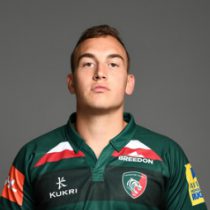 Tom, who was born in Chertsey, Surrey, lives in East Lothian. He began playing when eight years old at Olney RFC and is studying for A-levels in PE and history at Rugby School.

He joined the Leicester Tigers Academy in 2015 and represented England U16 and U17 before scoring a try and landing three conversions on his U18 debut against Scotland at Preston Grasshoppers last March.

He captained Rugby to an unbeaten 2016 season. He was included in Tigers 2017/18 Anglo-Welsh cup squad.

He scored 11 points on his Tigers senior debut in a narrow defeat for a young side at Bath in the Anglo-Welsh Cup during November 2017.

Hardwick gained his first senior rugby experience during 2017/18 and earned a call-up to the England Under-20s squad for the Under-20s Six Nations.