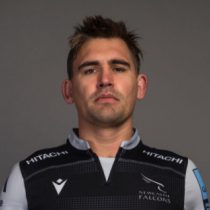 The experienced England flyhalf is equally capable in the No.10 or 12 jersey and has a quality boot on him. Flood was a Grand Slam winner with England at Under-21 level.

Already with 50 Test caps to his name, Flood is the most experienced pivot available to England and was a Rugby World Cup finalist in 2007. Much like his predecessor in the England team, Flood started out at Newcastle Falcons, but moved onto Leicester and guided the Tigers backline for 6 years.

After falling out of favour with England and with Freddie Burns arrival to Leicester, Flood will move to Toulouse for the 2014/15 season for a new challenge.

In May 2017, Flood confirmed that he will be leaving Toulouse with one year remaining on his contract.

He made 60 appearances for the club but has found many of his appearances coming from the bench.

In February 2020 he agreed a new contract extension at Kingston Park Stadium.