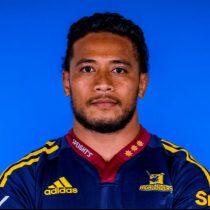 Originally coming to New Zealand from Tonga, Frizell is a rangy loose forward blessed with dynamic rugby skills, who can also cover the lock position.

He grew up in Tonga with his adopted family and started playing rugby. His brother grew up with his parents in Australia and now plays for St George Illawarra Dragons as a second-rower in the NRL.

Frizell went to a Catholic school in Tonga on the main island – Tongatapu and came to Nelson to play for the Marist club, signing a development contract with the Tasman RU in 2015.

He represented New Zealand Marist at U 19 level, played one preseason game for the Makos and for the Tasman sevens team, and was then offered a 2015 Makos contract.

He made his provincial debut for Tasman in 2016 playing in all matches and after a blockbuster 2017 Mako season, seven appearances at lock, one at blindside flanker at one at No 8 in the NPC, earned a Super Rugby contract with the Highlanders.

Frizell hit the headlines in Round 10 of Super Rugby 2018 as he scored a hat-trick against the Blues. His strong form was rewarded when he received his first All Blacks call up for the 2018 June Series.

The powerful blindside missed out on the All Blacks' Rugby World Cup squad initially but was called into the squad following an injury to Luke Jacobson.

He went into the 2020 Mitre 10 Cup having made 29 appearances for Tasman Makos.

Following 44 games for the Highlanders, Frizell signed a new two-year deal with the club.