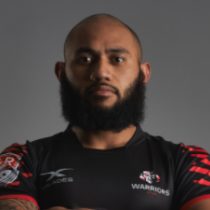 'Uhila is a 6’4 260lb number 8 who grew up in Tonga playing 1st XV rugby at Liahona High School. He came from a humble home where resources were limited, so rather than focus on himself, Saia pushed his younger brother Loni to fulfill their dream of becoming a professional rugby player. Saia’s youngest brother Loni is known as the Tongan Bear and recently moved from the Hurricanes Super Rugby team to Clermont in France.

Since moving to the U.S 'Uhila has Captained the Oceanside Chiefs and East Palo Alto Bulldogs. 'Uhila also spent time playing for the Life West Gladiators and made the Northern California Pelicans Select team in 2015.

'Uhila has spent the last two seasons playing for the Utah Brothers in the Rugby Utah Men’s Premier Division. As a captain, Uhila has been a menacing figure on the field and helped lead his team to last years final MPD final. On the back of an impressive MPD season, Uhila was selected for the both the Utah Selects and the USA Islanders who played Saracens in Bermuda.