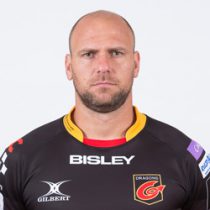 Having begun his senior career at the Leopards he spent a good few seasons in Currie Cup with them, Boland and Griquas before being an integral part of the Cheetahs Super Rugby side in 2013 that made the play offs.

2014 saw Landman, nicknamed 'Ligtoring' (Lighthouse), sign for the Newport Gwent Dragons where he has captained the side not only in Pro 12 but also in the European competitions.

After 68 incredible appearances for the Welsh Region, Landman signed a new contract that saw him become a Dragon until 2019.