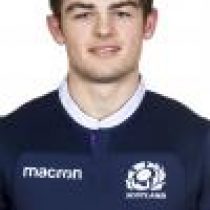 A former Stewart's Melville College student, Thompson currently studies at Glasgow Univeristy, where he also turns out for BT Premiership side Glasgow Hawks.

Thompson has represented Edinburgh at U16, U18 and U20 level, whilst he has also played on the international stage with Scotland U16 and U18.

Sport runs his family, as his grandfather has played cricket for Scotland, whilst his uncle played rugby league for Scotland.

Thompson has been named in Scotland u20s 6 Nations squad.