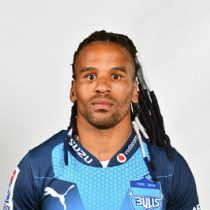 Blink and he is gone. Rosko Specman is an elusive runner with some of the best footwork in world rugby. Born in Grahamstown, Specman has gone onto entertain crowds worldwide with his exploits with the BlitzBoks.

Nicknamed Specmagic, Rosko played at the 2007 U18 Academy Week for Eastern Province Country Districts and then for the Mighty Elephants (now Eastern Province Kings) U19 team in the 2008 U19 Currie Cup competition.

In 2009, he moved to the Sharks, where he played in their U19 team. He made his debut for the Sharks in the 2010 Vodacom Cup quarter-final game against Griquas.

He joined the Pumas for the 2013 season. and was a member of the Pumas side that won the Vodacom Cup for the first time in 2015, beating Western Province 24–7 in the final. He was also called into a South Africa Sevens training squad in 2013 and was named in the 7s squad for the USA leg of the 2013–14 IRB Sevens World Series.

Rosko also got a call up for the 2016 Summer Olympics in Rio de Janeiro, where he was named as a substitute for their first match of the competition against Spain, with South Africa winning the match 24–0. He was part of the successful South Africa 7s team that claimed the 2016/17 World Seven Series title.

In June 2017 he signed a short-term deal with the Cheetahs that saw him stay at the Super Rugby & Currie Cup side until October following his nomination for the World Sevens Player of the Year. The BlitzBok then signed a deal with the Blues Bulls until the year 2020.

He went on to make 23 appearances for the Bulls before rejoining the Cheetahs in 2020 on a two-year deal that will still allow him to turn out for the South African Sevens side.