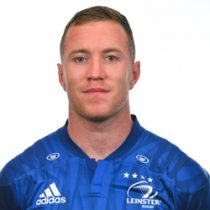 A member of the Leinster academy, O'Loughlin graduated from St Michaels College while playing his club rugby with Old Belvedere RFC in the Ulster Bank League.

O'Loughlin's preferred position is 13 but is very versatile across the back line and has featured regularly on the wing.

Injury curtailed his introduction into the senior side during his second year with the Academy.

The centre impressed in pre-season scoring a try against Gloucester and has done enough to already feature in 7 Pro12 matches.

O'Loughlin made his debut for Leinster when came off the bench in the 2016/2017 season opener against Treviso.

The Leinster centre was named in Leinster's Champions Cup squad to face Northampton, and continued his try scoring streak.

O'Loughlin has 1 Ireland cap after being named in the squad for the 2017 Summer Tour.

He heads into the 2019 Champions Cup with 11 appearances in the tournament and has scored 15 points.