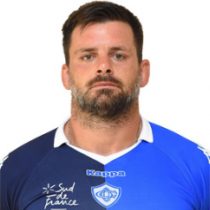 Rodrigo is a Uruguayan born second row playing his rugby in the Top 14 with Castres, playing over 300 times for the French outfit.

The second row has been called the Luis Suarez of Uruguayan rugby, as he was the country's only professional rugby player & represented them at the 2015 Rugby World Cup.

Rodigo helped Uruguay beat Russia 57–49 to qualify for the 2015 version of the tournament, after the country's 12-year absence.

After 3 months, he announced his retirement from international rugby, having played 38 times, 12 as captain, and scoring 45 points in his 15-year international career.

He returned to the national team to play for the 2019 Rugby World Cup qualifiers.