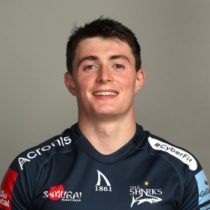 The Manchester-born scrum half started playing rugby when he was just five.

Raffi was part of a Broughton Park Rugby Club side that went unbeaten and scored 267 tries at U9s level and he has not looked back since.

Quirke exploded onto the scene during the 2020/21 season to become the youngest Sale Sharks scrum-half in Premiership history.

The electric half-back nearly scored almost immediately after making his debut against Harlequins and continued to provide spark in subsequent appearances. Raffi has already established himself as a fan favourite and has been affectionately dubbed 'Raffi de Quirke' after World Cup-winning Sharks scrum-half Faf de Klerk.

He made his first team start against Wasps in March 2021 and was named in the England u20 squad soon after.

Quirke's form in the 2021-22 Premiership could not be ignored and, after a string of brilliant performances for Sale, was included by Eddie Jones in the England squad for the 2021 Autumn internationals.