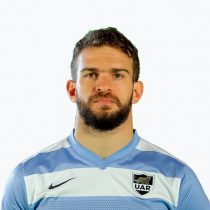 A speedster with a superb trying scoring record, Ramiro Moyano has shown his promise from a young age.

He made his international senior debut in 2011, coming off the bench and scoring a try in Argentina's 61–6 win over Chile, and continued to represent Argentina in further clashes.

In 2015, he was named in the Super Rugby team the Jaguares, where his first appearance came in April 2016.

Moyano became a regular for the Jaguares and Los Pumas.

He featured in the Rugby World Cup with Argentina and took his test cap tally to 35 and has scored 15 tries.

After the World Cup, he signed a deal to join Toulon until the 2019/20 season.

In April 2020, having made just 5 appearances scoring two tries for the club, Moyano signed a two-year extension which will keep him at the club until 2022.