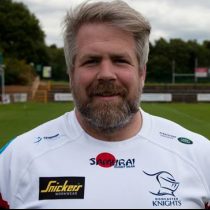 Having left Castle Park in 2011, the former Scotland U21 also enjoyed successful spells at Moseley and London Scottish before returning to South Yorkshire.

He has established himself within the Knights pack and started the vast majority of the 2014/15 Championship games.