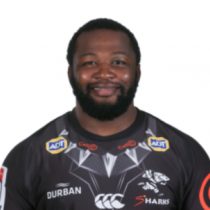 Retshegofaditswe 'Tshego' Nché better known as Ox Nche is an exciting and powerful loosehead prop. Born and bred in Bloemfontein, where he attained certain cult status as Free State Cheetahs No 1, Ox attended HTS Louis Botha and was selected in the 2012 Free State U18 Craven Week side, despite being a year younger than the majority of his peers Nche was selected to represent SA Schools that played against England France and Wales.

Once he finished high school, he attended the Free State University and represented Shimlas in the Varsity Cup. Following some stellar performances in the Varsity Cup he was named in the Springbok U20 squad for the 2015 World Rugby Under 20 Championship.

After playing for the under 20 Springboks in 2015, Ox started his senior career at the Cheetahs in Super Rugby and Currie cup. Ox had a fantastic 2016 which saw him pick up the Currie Cup Player of the Year award.

Nche featured in 13 of the Cheetahs 15 Super Rugby matches in 2017, taking his overall tally in the competition to 25 before the Cheetahs join the Pro14.

The lively front-rower featured in all 22 of the Cheetahs Pro 14 matches and his performances caught the eye of new Springbok coach Rassie Erasmus who named the youngster in his June Test squad to face Wales and England.

He made his test debut against Wales in Washington. In July 2018, despite interest from other rugby clubs, Nche decided to extend his contract with the Cheetahs until the end of October 2019.

Following the conclusion of his contract with the Cheetahs, Nche signed a deal to join the Sharks ahead of the 2020 season.