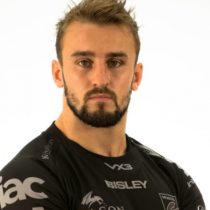 A brutally effective tackler, Ollie Griffiths has built a reputation as an excellent flanker since making his debut for the Dragons against Ulster in 2014.

A product of the Dragons Academy, the Newbridge-born forward impressed for Cross Keys and Newport before making the step up to regional level.

Griffiths made history at the club when he was named as the club's captain for their 2014/15 campaign as he was their youngest skipper.

The flanker was called into the Wales Under-20 set-up after impressing at Rodney Parade and went on to captain his country against Scotland Under-20s in their 2014 Six Nations campaign. He was later named in the Wales Under-20s squad for the 2015 World Championships.

His eye-catching displays in the back row were rewarded with a call-up the senior Wales tour to Tonga and Samoa with his test debut coming against Tonga in Auckland in June 2017.

Injuries have hampered Griffiths' career to date but he has managed to make 73 appearances for the Welsh Region scoring 4 tries.