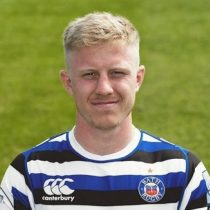 Fox is one of the most exciting talents to come out of the Yorkshire Carnegie Academy following his league debut in the Greene King IPA Championship at Jersey Reds in November 2017.

He made his debut the 2016 season and learnt his trade on dual registration with Huddersfield RUFC alongside fellow academy graduate Harry Davey.

An early convert from rugby league, Fox played the 13-a-side game from the age of five and joined Wakefield-based Sandal RFC four years later. He switched to the Yorkshire Carnegie Academy when 14 and so the story of his path to six England U18 caps rolled on.

His senior Carnegie debut was against Newport Gwent Dragons December 2016 but his first Red Rose experience was even earlier – for the U17 side against France.

He joined Bath Rugby from Yorkshire Carnegie ahead of the 2019/20 season.