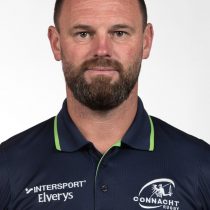 A Connacht man through and through, Nigel Carolan is a native of Galway and was a student in St. Joseph's Patrician College in the city.

Carolan played primarily as a wing, but was also used at centre during his career. He represented both Galway Corinthians and Galwegians at amateur level. In 1996, at the outset of the professional era, Carolan was a part of Warren Gatland's Connacht side. He played for the side in the Interprovincial Championship and the European Challenge Cup until 2000, when a neck injury forced him to retire at the age of 26.

Carolan was appointed as head of Connacht's academy in 2004, overseeing the development pathways of youth players, coaching under-age sides and scouting youth prospects from outside the province. For the first year of his career, he also served as a technical analyst to the Irish under-21 team. Carolan was later appointed as assistant coach to the Irish under-20s under Allen Clarke in 2008, staying in the role until 2010.

Nigel Carolan made a name for himself as one of Ireland's upcoming coaches after a very successful time in charge of the Ireland u20s between 2014 and 2017. Carolan coached the side in three Six Nations and two World Championships, with the team's runner-up finish in the 2016 World Championship their best ever performance in the tournament.

He also worked with the Connacht Academy for 13 years and was rewarded with the Backs coaching job when Kieran Keane took over the reins at the Province in 2017 and has since remained at the club since Andy Friend took over.

In June 2021, he joined Glasgow Warriors as Assistant Coach.