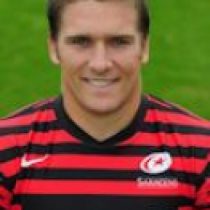 The South African loose forward is a natural leader and captained a host of teams in Cape Town to titles before being drafter into the Stormers squad in 2012.

The fearless tackler and strong forager caught the eye of the Saracens coaches and decided to continue his rugby development in England. The ability to play anywhere across the back row make him an excellent addition to the Saracens squad.

Having climbed his way through the ranks he is no stranger to starting at the bottom of the pile and will relish the fresh challenge at Vicarage Road.

He went on to join Bedford from Saracens in 2014, and his visible skills saw him being named captain of the club later that year.

In April 2016, Fenton-Wells agreed to join Championship play off rivals Bristol Rugby for the 2016 season.

Having made a positional change to hooker and playing a formidable role in their promotion season, Fenton-Wells agreed a 1 year contract extension with Bristol in their 2017/18 season.

In 2018, Fenton-Wells switched position to hooker, scoring twice against Nottingham in the promotion sealing win at Lady Bay.