James Tuttle will emerge from the Super Rugby wilderness on Friday after Coach Dave Wessels named him in the match day 23 to tackle the Brumbies. Meanwhile Brumbies coach Dan McKellar has made two changes to the starting side for tomorrow night's round six clash.

Brumbies Vice-captain Tom Cusack and winger Andy Muirhead return to the run on side for the first time since they split the Man of the Match honours in round three against the NSW Waratahs. For the third straight week Wallabies trio Scott Sio, Folau Fainga'a and Allan Alaaaltoa make up the front row, with the impressive young lock pairing of Darcy Swain and Nick Frost completing the tight five. Cusack is joined by Rob Valetini and Pete Samu in the loose forwards, the latter two starting every game so far in 2020.

The halves see fellow vice-captain Joe Powell partner with Bayley Kuenzle for the third straight week with Irae Simone and Tevita Kuridrani running the midfield.  Muirhead will be joined in the back three by try-scoring powerhouse Solomone Kata and the electric Tom Banks, who could match up against fellow Wallaby Reece Hodge at fullback. Canberra boy, Connal McInerney will again be required in the later stages of the match as the replacement hooker, with fellow local pathway products Harry Lloyd and Tom Ross the other front row finishers.

Will Miller and Ben Hyne will provide the remaining cover for the forward pack. Former Australian Under-20s number nine Ryan Lonergan will make his first appearance in the new competition as the replacement scrumhalf, with last week's hero Mack Hansen and Len Ikitau rounding out the matchday 23.

“It’s a great moment for Bobby – the team were really chuffed to see him in there; he got a standing ovation when he was named and also for the medical staff and the athletic performance staff who’ve worked incredibly hard over a long period of time to get him ready,” explained Coach Wessels.

“Bobby is a real team man and has got just real leadership and I think everyone’s just really pleased for him that he’s back in the mix and this is his opportunity now to play some rugby and cement his place in the team.”

The inclusion of Tuttle follows a raft of changes to the backline. Frank Lomani assumes the starting number 9 jersey in the absence of Louwrens, whilst a midfield combination of Andrew Deegan, Matt To’omua and the returning Campbell Magnay will have their first outing together.

Up front, Matt Philip forces his way back into the pack, partnering with tearaway lock Trevor Hosea. The backrow also takes on a different look, with last week’s try scoring hero Isi Naisarani sharing the load alongside a recalled Josh Kemeny and Brad Wilkin. Wilkin, like Tuttle, has enjoyed his own injury comeback, returning to the bench last week against the Force in what was his first game of rugby following an ACL recovery.

“Brad’s probably the same – he’s had also a number of significant injuries, but I thought he played really well when he came on and has probably a similar personality to Bobby – he has real leadership potential.”

“We don’t want to put too much pressure on Wilko – he’s a big part of our team going forward and I think some exposure to big minutes now is important, particularly as we start to get towards the finals.

“What we don’t want to do is get there and then you’re suddenly playing guys who’ve never had a run or exposure, so we’re trying to balance exposures and performances as we go.”

As the Rebels aim to make a breakthrough finals appearance this campaign, Wessels took a moment to recognise the challenges facing may of the players friends, families and fans back in Victoria.

“We got together as a team before training yesterday and recorded a video message for everybody back home.”

“I was just talking to my wife the last couple of days and she talked about how eerie the city is and I think everyone’s doing it pretty tough over there.

“We definitely feel a responsibility to put out a good performance and make those people proud of us and we’re very grateful – we had a huge number of messages from people back home and that really means a lot to the boys.

“We’re pretty motivated to make them proud and to go well.”

Brumbies coach Dan McKellar said: "It's great to be able to call on the experience of Tom and Andy and have them slot back into the starting side this week."

"We've got depth and plenty of confidence across the whole squad and to be able to rotate a few bodies after a really physical game against the Reds last week is a positive for us.

"The side has prepared really well ahead of the six day turnaround and we'll travel up to Leichhardt excited by the challenge of taking on a tough Rebels side tomorrow night." 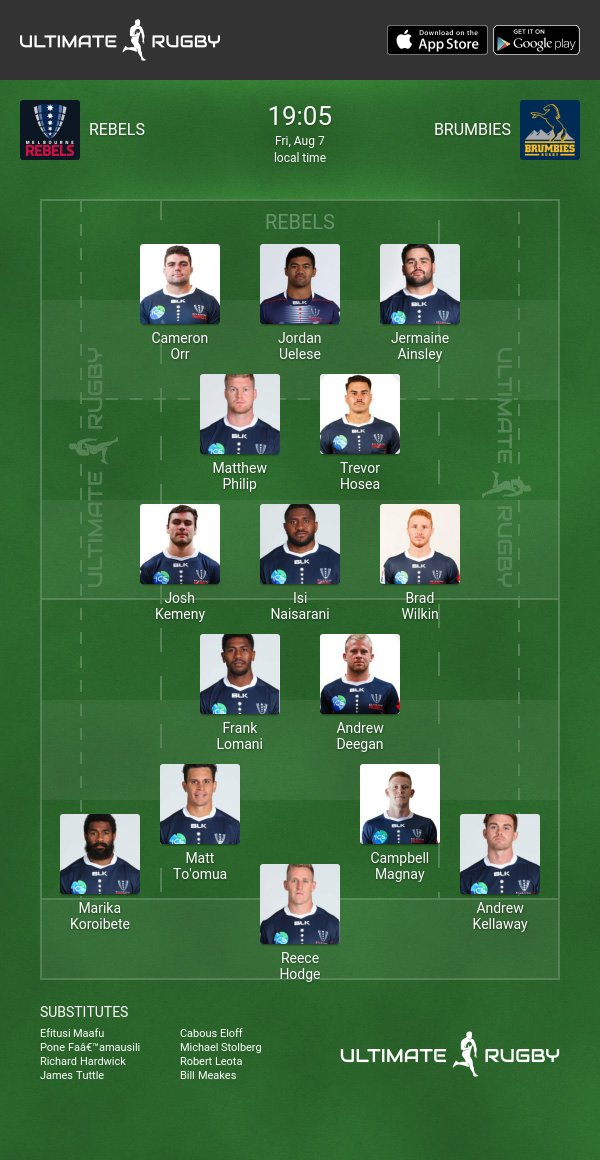 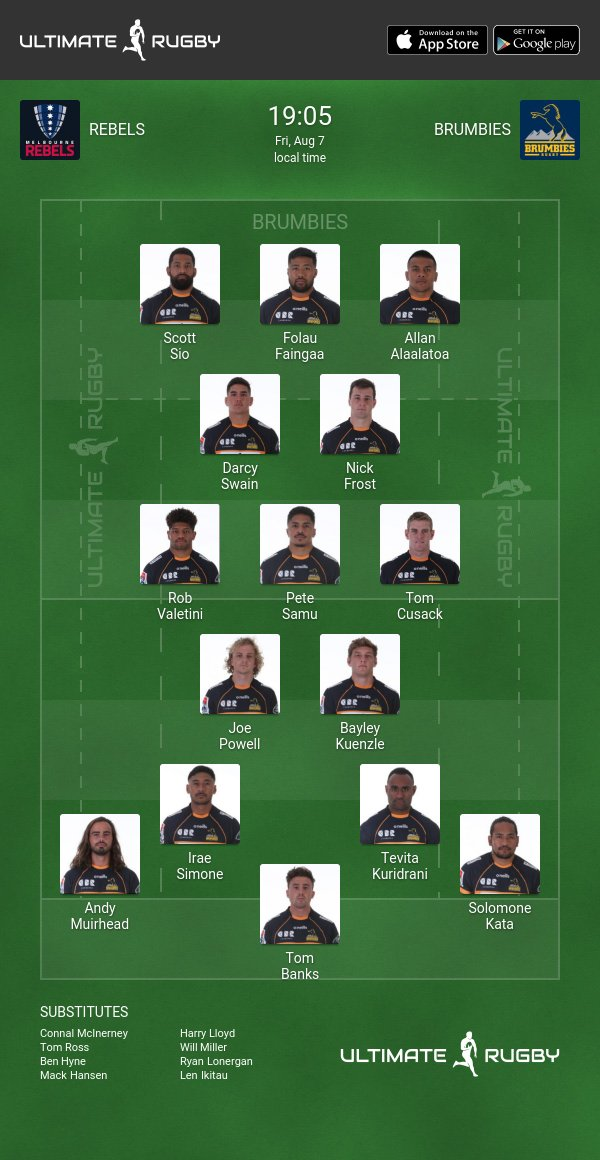