Sam Johnson returns as one of ten changes to Scotland's team

Centre Sam Johnson will make his first Scotland appearance since making his test debut during the 2019 Six Nations in this Saturday’s Summer Test match against Georgia at the Dinamo Arena, Tbilisi.

The midfielder is one of 10 changes to the side that defeated France 17-14 at Murrayfield last weekend. He will make his comeback alongside 23-year-old Rory Hutchinson, who will start his first Test match for his country.

Scotland will be the first Tier One national side to travel for a Test match on Georgian soil, which doubles as the last opportunity for players to stake their claim for the final 31-man group for Rugby World Cup 2019 in Japan, announced by Head Coach Gregor Townsend at a public event at Linlithgow Palace on Tuesday 3 September.

Scotland Head Coach, Gregor Townsend, said: “We’re pleased to welcome Sam [Johnson] back into the side, having performed so well for us in the spring, while a number of other players also get the opportunity to build on Saturday’s performance.

“There were improvements in our back-to-back games against France, in particular in defence, game management and at scrum, as well some elements of our attack.

“All of these will be put to the test against a very good Georgian side who we expect to be extremely motivated by their passionate home support."

Hooker Stuart McInally returns to start the match and will captain the side once again, having done so in the opening Test against France in Nice, while the team also features first campaign starts for full-back Blair Kinghorn, prop Allan Dell and number 8 Matt Fagerson.

Wing Darcy Graham replaces the injured Tommy Seymour (head), with Sean Maitland remaining on the other flank of the back-three. Returning half-backs Greig Laidlaw and Finn Russell complete the back division.

In the pack, prop Willem Nel starts again on the tighthead side alongside Dell and McInally in the front-row, while second and back-row forwards Grant Gilchrist and John Barclay have been promoted from the bench to start.

Lock Ben Toolis comes into the squad to start alongside Gilchrist, while last weekend’s man-of the-match, Hamish Watson, returns to link up with Barclay and Fagerson in the loose forwards.

Scotland team to play Georgia in the Dinamo Arena, Tbilisi 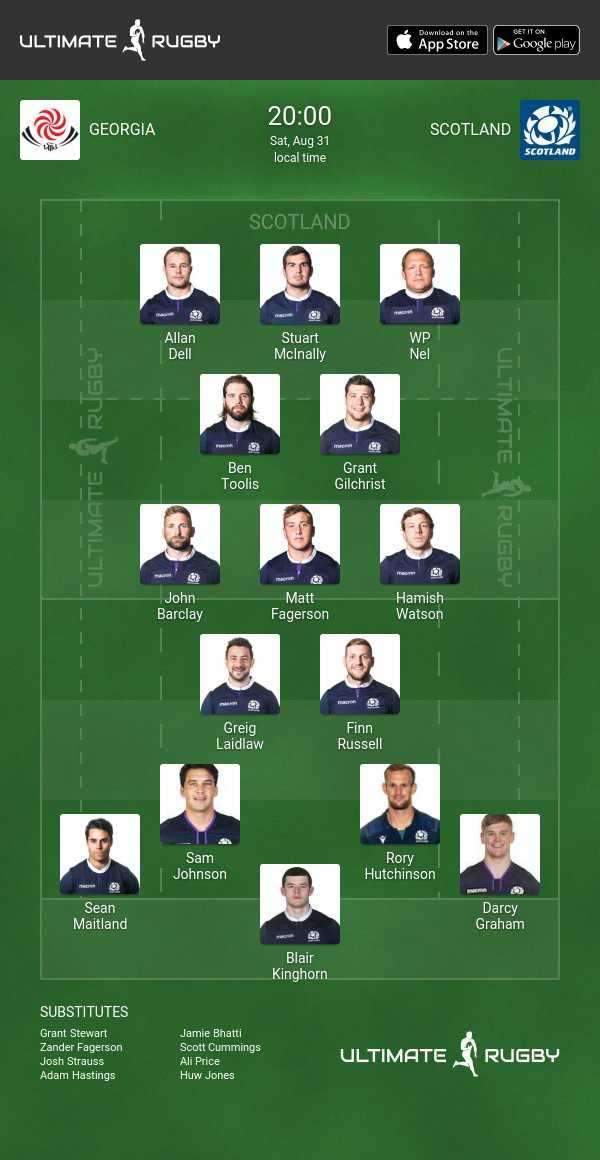