Following a two-week hiatus, the Premiership returns with a bang this weekend when Bath head to Ashton Gate for the hotly anticipated West Country derby.

Heading into the clash, Bristol top the Premiership table with Bath sitting 9th after just two wins from six.

Pat Lam's side solitary defeat in their last seven encounters was 38-51 at home to Clermont in Round 1 of the Champions Cup while the Bears Bristol have lost only once at Ashton Gate in Premiership Rugby since December 2019: 22-25 to Exeter Chiefs in August.

Bristol have been dealt a timely boost with Samoan International Chris Vui returning to the starting line-up in one of six changes to the side that beat Exeter Chiefs in round six to go top of the Premiership. Henry Purdy and Andy Uren come back into the side, while Ioan Lloyd is selected at fly half. In the pack, John Afoa and Dan Thomas earn starts for the Bath Rugby clash. Max Malins, Harry Randall and Ben Earl are unavailable on international duty, while Kyle Sinckler is serving the first game of a two-match ban. Callum Sheedy is included among the replacements having been released from Wales camp on Thursday.

Bath Rugby’s most recent victory (excluding the walkover win over London Irish) was 33-17 at Worcester in Premiership Rugby on 5 December. Bristol’s only defeat in their last five fixtures against Bath was 19-26 in “The Clash” at Twickenham in April 2019. Bath’s only previous victory at Ashton Gate in Premiership Rugby was in March 2008.

Bath Rugby make seven changes to the starting XV. The pack is altered for the with Charlie Ewels, Will Stuart and Beno Obano missing as they begin their preparations for England’s Six Nations. That means that Juan Schoeman and Christian Judge come into the front row and sit either side of Tom Dunn, with Josh McNally taking over the captaincy in Ewels’ absence and is partnered by Elliott Stooke in the second row.

Josh Bayliss replaces Taulupe Faletau at blindside, Miles Reid comes in for Sam Underhill, and Zach Mercer keeps his place at No. 8. Josh Matavesi returns to the starting line-up in midfield to partner Jonathan Joseph and the smiling Fijian comes in for Cameron Redpath, who has spent the week with Scotland following his first call-up in preparation for the Guinness Six Nations.

Gabriel Hamer-Webb is the only other change coming onto the wide channel with Ruaridh McConnochie. 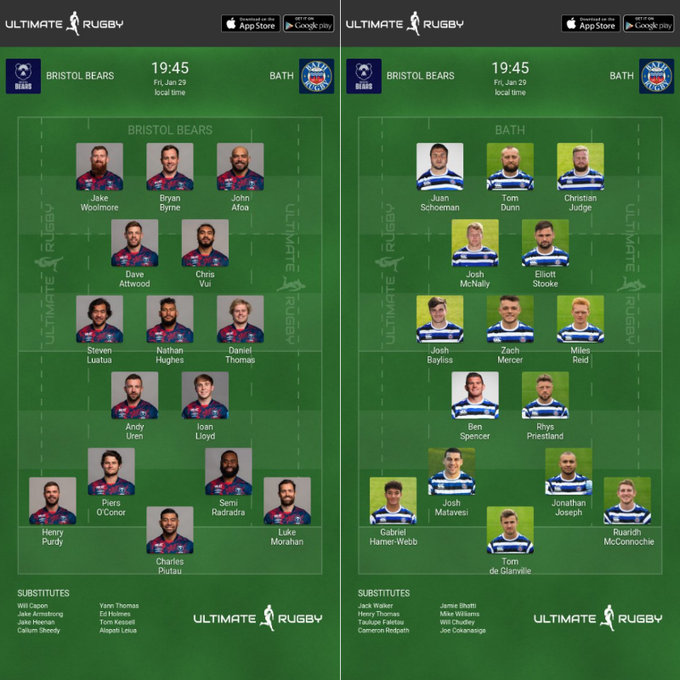