Ireland wary of a big performance from underdogs Australia

Ireland will be wary of Dave Rennie's inconsistent Wallabies side when they host Australia at the Aviva Stadium on Saturday in their final test match of the year.

Ireland head into the match off the back of victories over South Africa and Fiji in the Autumn Nations Series.

Meanwhile, the Wallabies' inconsistent performances have seen them edge Scotland, narrowly lost to France and downed by Italy.

It is the first time since 2018 that the two sides lock horns. Ireland claimed a series victory over Australia in June that year winning the final two tests after losing the first 18-9, sealing a 2-1 series win.

The Wallabies return to Dublin for the first time since 2016 where Ireland survived a second-half rally to secure a 27-24 victory. Prior to 2016, the Wallabies ran out convincing 32-15 winners in Dublin in 2013, while Ireland came out on top in 2014 winning 26-23. Australia have played 19 games in Ireland including the first meeting between the two nations in 1927. They have recorded 11 victories and a draw – the 20-20 game in 2009 at Croke Park.

Andy Farrell has made three personnel changes to the Ireland starting XV that beat Fiji along with three positional changes. Johnny Sexton returns to captain the side at flyhalf. Jimmy O'Brien switches the wing with Hugo Keenan returning at fullback.

James Ryan partners Tadhg Beirne in the second row while Peter O'Mahony's return sees Caelan Doris move into the no.8 jumper. Leinster lock Joe McCarthy is in line for his debut from the bench. 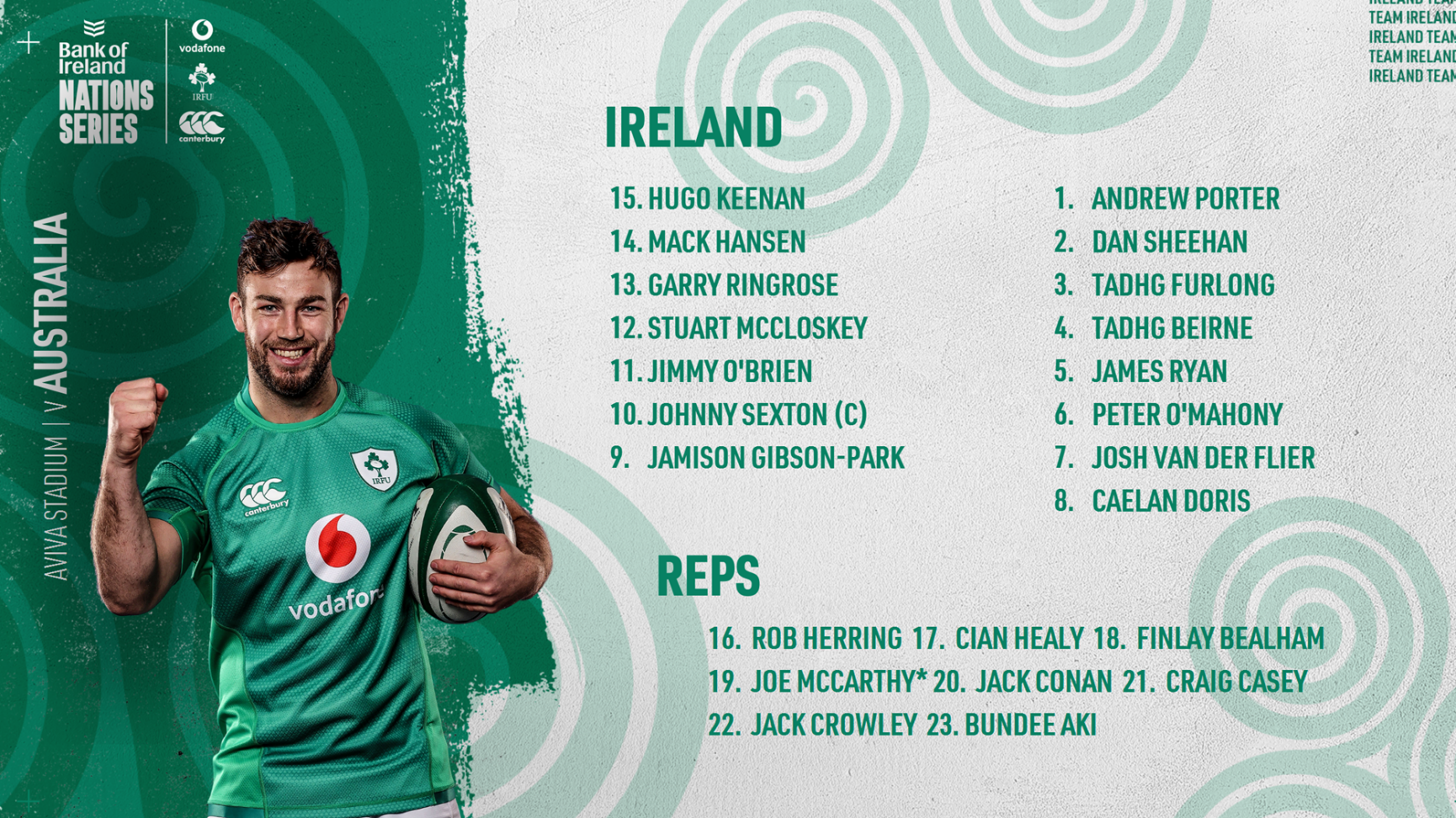 As for the Wallabies, James Slipper returns to the starting lineup and captains the side from the front row earning his 126th Test.

Cadeyrn Neville and Nick Frost pack down in the second row with Will Skelton in the replacements.

The Wallabies have opted for experience in the halfbacks with Nic White and Bernard Foley starting at nine and ten. Hunter Paisami starts at inside centre with Len Ikitau outside of him.

Finally, Andrew Kellaway returns at fullback with Tom Wright and Mark Nawaqanitawase on the wings. 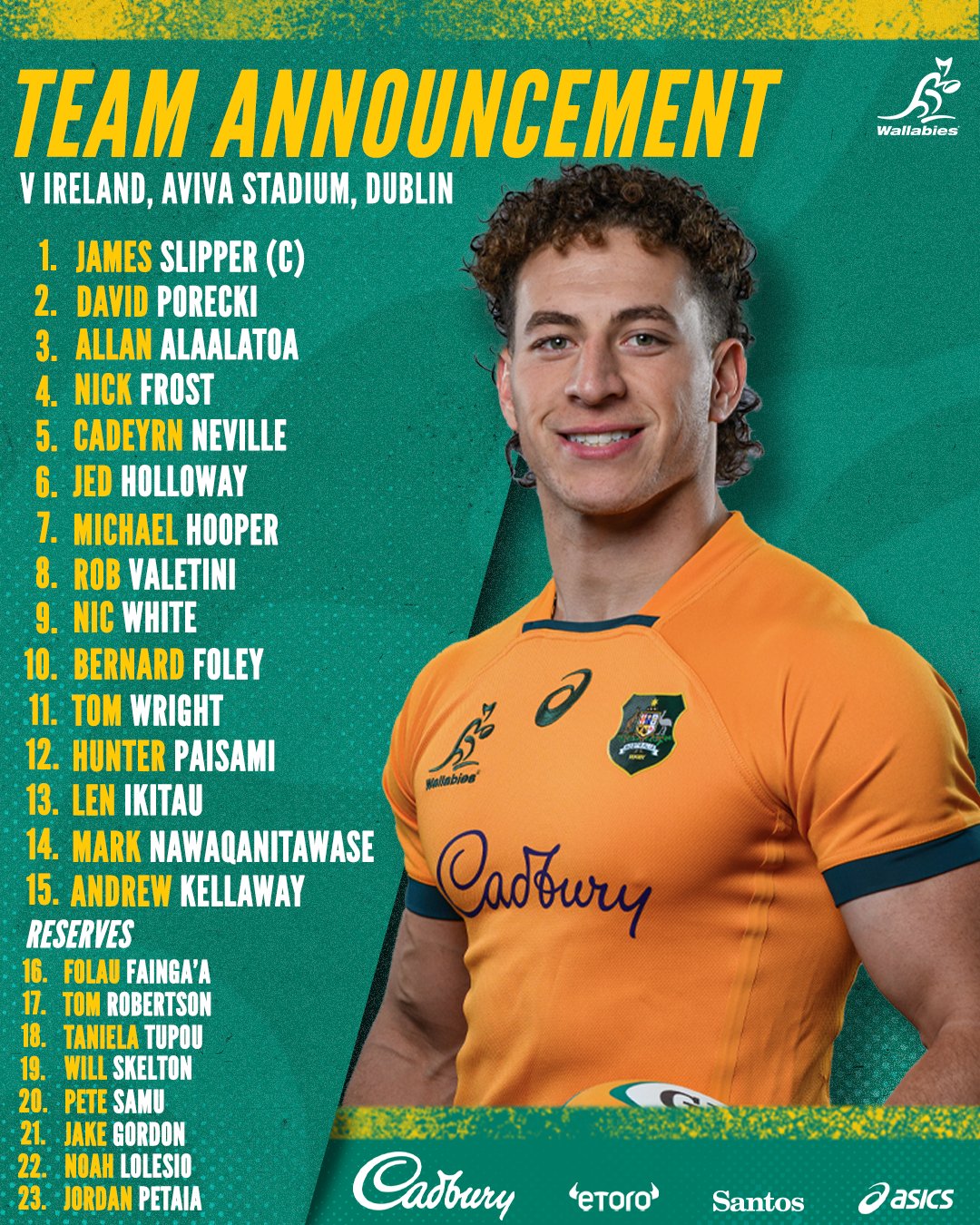 Wallabies coach Dave Rennie said: “We were all bitterly disappointed after last weekend’s performance. We’re better than that and we need a response against Ireland on their home deck.”

“We’ve had a great week of preparation and welcome back a wealth of experience to the team this weekend.

“We’re excited by the challenge to play the number one side in the world and can’t wait for Saturday night.”

Ireland captain Jonathan Sexton, who has a won six-and-lost four record against Australia, said: “They are an outstanding team with very, very good individuals littered throughout it, so that’s the first thing,”

“They have very good coaches and they are Australia! They love being the underdog, they love coming to play against teams that are maybe ranked ahead of them, or they see as a scalp and that’s where they come into their own.

“And they have done forever, as long as I can remember watching them. They’ve always had big performances in them, and they will be no different this week.”