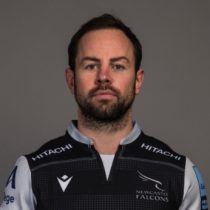 The nippy scrumhalf made his original debut for Newcastle Falcons in 2008 after playing his junior rugby with hometown side West Hartepool, and appeared 79 times for the North East side before moving on to Leicester Tigers in 2011.

He has played for England through several age-group levels and has a great deal of promise. Young has some sevens experience for England, where he achieved some success on the IRB circuit, scoring the winning try in the final against New Zealand in 2009.

Having spent two seasons at Welford Road, including the Tigers’ Premiership-winning 2012/13 campaign, the 2010 and 2011 Churchill Cup winner then moved on to Bath Rugby where he spent a further two seasons.

In February 2015, Young returned to Kingston Park, the former England 7s international returning to the England Saxons fold for their 2016 series win over South Africa A after playing in all but one of Newcastle’s 22 league games that year.

On 5 March 2020, he signed a new three-year deal to remain with Newcastle Falcons. Young has been a central figure for the Falcons in a season which has seen them winning all 21 of their games, building a 13-point lead at the top of the Championship as they remain on course for promotion straight back to the Premiership.

The Hartlepool-born scrum-half has scored three tries in 11 appearances this season for the unbeaten Championship leaders, including the bonus-point try in last weekend’s 38-3 triumph away to Jersey Reds.

Making a total of 169 appearances in his two spells with the club, Young said: “It was a very easy decision for me to stay here.